No Result
View All Result

by Markus
in Pferde 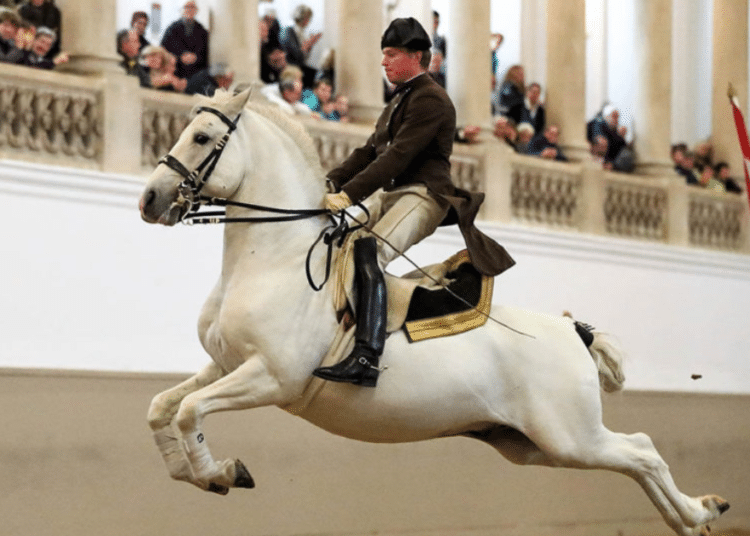 Some History of the Lipizzaners

The aristocratic Lipizzaners are descended from the Iberian Horse, which is the oldest breed in the world. Iberians were used as war horses from 4000 years before Mohammed, when camels were used as mounts in warfare and their Lipizzaner descendants today are trained to perform movements which were originally taught to military mounts so that they were more effective in battle.

The breed was first established in 1590, by the Archduke of Austria, Charles II. He began the first stud farm in Lipizza, then a part of Italy, and began breeding the Iberian with the native breeds of Italy. Until well into the late 1700s, these horses were crossbred with the finest of horses from Spain, Italy and Arabia. They were used, during that time, as family and carriage horses for the Royal Court in Vienna.

In 1735, Charles VI of Austria established the Spanish Riding School in Vienna. It is the oldest riding school in the world (so named for the Spanish horses who were a large foundation of the breed), and for more than 400 years has trained riders and horses to perform the classical dressage movements which have made the Lipizzaner famous. When Charles began the school, he also began recording the bloodlines of the breed.

Of the nine original studs used to establish the breed, six bloodlines are used solely for breeding at the Spanish Riding School and Lipizzaners of South Africa at Kyalami. These are the ones which they recognize as the purest of the breed. Those six stallions were:

Although the two breeders mentioned here tend to favor the light-grey and white stallions for showing, they consider it bad luck if there is not at least one bay horse in their stables.

Lipizzaners are branded with a special symbol to indicate from which bloodlines they descended. They bear the symbol of their sire, and the symbol of their dam’s sire. This is called the “ancestral brand”. Foals are branded with a number so that one can easily locate them in the foal registry. In addition to these two brands, each Lipizzaner also carries the “brand of descent” on its left cheek. This is quite often an “L”. For more information about these symbols, see:

More recently, two other bloodlines have been internationally recognized as purebred. Those are:

While not indicated as being recognized by the two aforementioned breeders, these bloodlines are acceptable to many modern-day advocates of the bloodline purity.

In 1920, the decision was made to move the Lipizzaners from Lipizza (now in present-day Slovenia) to Piber, Austria. During World War 2 the entire inventory of the stock was moved to Holstau to prevent the animals from being seized and used in battle, or requisitioned as food supplies by hostile forces. The line almost became extinct (only 250 horses survived), and would have been wiped out completely without the intervention of General George Patton. He and his troops rescued the survivors so that they could move on to continue their incredible history.

In 1948, after having fled Europe, Count Elemer Jankovich-Besan moved some of the surviving horses to South Mooi River in South Africa. He gifted one of the stallions to Major George Iwanowski who, in turn, started the Lipizzaners of South Africa School. This is one of the two accredited Lipizzaner Centers in the world, the other being the Spanish Riding School.

Description and Conformation of the Lipizzaners

Foals are usually dark or black-brown when born. They go through several different color changes before finally achieving their adult color between the ages of four and ten. Most often, the color is light-gray or white. However, there are also duns and bays. They are simply not as common and it is a rarity to have an adult Lipizzaner be totally black-brown or black.

The breed is long-lived, and has been recorded to live as long as 34 years. It is not uncommon for a Lipizzaner to live well into its 20s. They are very loyal and are well-known for their magnificent stamina, agility, strength, and courage.

For training and showing, only stallions are used. And the breeders/trainers look for a certain conformation in those horses which are eventually trained for dressage. These include:

The “Airs Above the Ground”, when performed and observed, bring to mind the movements of a ballerina. In a manner of speaking, the Lipizzaner is the ballerina of the equine world.

The exercises performed by these magnificent creatures include:

and many more. It is fascinating to watch these horses in performance, and it is a once-in-a-lifetime experience which true horse-lovers should experience. They are stunning and, at times, awe-inspiring. They truly are the ballerinas of the equine world, and a marvelous site to behold!

The breed is rare today, with only about 3,000 horses registered as purebreds. But, the numbers are increasing as breeders use the horses more in harness. Slovenians use the stallions for dressage display and to cross-breed with their own native stock for use in agricultural work. The Lipizzaner is still the only breed used by the Spanish Riding School in Austria.

No Result
View All Result